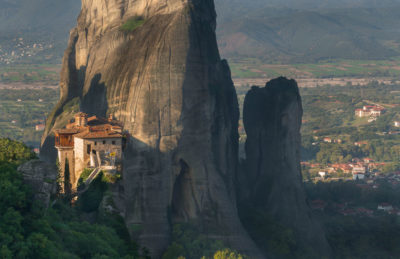 There are many other things to do in Meteora than just exploring the monasteries of Meteora. Although you cannot visit this magical land filled with monoliths without touring them.

Meteora is a thriving community filled with friendly Greek traditions that is surrounded by the most beautiful landscape on earth! Located a four-hour drive from Athens, we hopped in our car to join Visit Meteora on a tour of this beautiful Greek Destination.

Basing ourselves in the main town of Kalabaka, we enjoyed everything the region has to offer.

Things to do in Meteora, Greece

1. Tour the Monasteries of Meteora

It is hard to believe that monks built these monasteries by hand above massive monoliths. They had to pull themselves up with ladders and ropes just to get to the top of rocky spires reaching 300-500 meters in the air. (984 to 1640 feet)

But once they were tucked away high in the air, they were safe and sound to live a life of peace and solitude.

These are the monasteries you must visit in Metora.

Read more about the Monasteries of Meteora

2. Hike Through the Monasteries and Monoliths

Most people simply drive to the viewpoints of Meteora on a day tour from Thessaloniki or Athens, but to spend a few days here and explore is a real treat. One of our favorite things to do in Meteora was to hike through abandoned monasteries to see the lesser-known sights.

There are monasteries that are completely hidden from the road that nobody can see unless they go for a hike and the landscape is absolutely gorgeous.

Watch our video of our hike through Meteora here.

Something that is very unique to Meteora is the mushroom museum. It is actually a combination of the Natural History Museum and Mushroom Museum. There are more than 300 embalmed animals on display showing wildlife from Europe’s past and present.

But it is when you enter the mushroom museum it is where things get interesting. If you watch our videos of Meteora in this post, you’ll notice that the climate is quite damp. That makes for the perfect climate for mushrooms.

The mushroom museum is cool to walk through to learn everything you need to know about mushrooms with more than 250 mushrooms on display that are sculpted and hand-painted.

Connected to the museum and shop is the Neromilos Restaurant where we at an entire 6-course sampler meal of mushrooms served in every possible way. Everything from our drinks to desserts was made from mushrooms. and there is a great shop to pick up souvenirs. We grabbed the most delicious truffle oil.

You can book this experience at Neromilos Restaurant after a visit and tour of the fascinating Mushroom Museum.

Theopetra vineyard is located on the slopes near the prehistoric cave of Theopetra. Grape seeds were discovered in the cave showing a long history of wine in the region. It seems that wherever we go, monks have always made their own wine and beer. And Meteora is no different. It was no surprise that Monks started producing spirits way back in the 14th century.

Besides wine, make sure to sample aged Tsipouro. Tsipouro is a strong Greek spirit that is 40 – 45% alcohol. You can book tours and tastings at the Vineyard.

Kalabaka (aka Kalampaka) is the main city of Meteora that is set within the monoliths. We stayed in this city allowing us to walk around and enjoy the friendly Greek and local culture. We enjoyed beautiful views of the monoliths from Meteoron Panorama Restaurant as we savored gastronomical delights.

We danced to Greek musicians playing guitar at the Archontariki Restaurant and we ate countless incredible meals celebrating our favourite Greek cuisine.

There is no doubt that one of the best experiences in Greece is to go out at night to enjoy delicious Greek Food. Meteora was filled with great places to dine. Each with its own flare and specialty. And each with its own welcoming hospitality. Here are some suggestions of where to eat in Meteora.

9. Try the Via Cordata

The Via Cordata to the Great Saint is a Via Feratta that is just a short walk from the village of Kastraki. It’s hard to believe that the monks walked these tracks with no ropes or security, but you can scale the ancient pathway to the top with the safety of guides. It is followed by an abseil down and if you are looking for something adventurous to do in Meteora, this is it!

10. Hike and Scramble tour of the Great Saint

Another of the more adventurous things to do in Meteora is the Hike and Scramble tour of the Great Saint with Visit Meteora. Starting in the town of Kalampaka, this climb takes you up the highest of all the Meteora cliffs, the Rock of the Great Saint. It is 630 meters high, but your adventure will take you to 400 meters above town. The paths cling to the side of the cliffs as you walk along secured to ropes.

One of the coolest things we saw during our tour around Meteora was the Monk Jail. This crazy spire consisted of 14 different levels to house 14 different monks should they be disobedient. They were completely isolated.

Located 4km from Meteora, The Theopetra Prehistoric Cave dates back to the Middle Palaeolithic to the end of the Neolithic period. (that means they are some 130,000 years old). This unique archaeological site shows evidence that humans had occupied these caves for the full 130,000 years of their existence. Excavations began in 1987 and one of the most significant finds is the world’s oldest wall dating back some 23,000 years.

It is fitting that a place that literally means “suspended in air” should have rock climbing. The monks were the original rock climbers, but now it has become a bit of a rock climbing mecca.

There are nearly 800 single and multipitch pitch sport routes outside the villages of village of Kastraki and the town of Kalabaka.

14. Take in the Views of Kalabaka

If you can, hire a car for the day to drive you around to the best views of Meteora. We went early in the morning to beat the tours and had the rocky lookouts all to ourselves. There are many places to pull off from the road to see the magnificent panoramic views. Be careful though, many of these lookouts have vertical drops so don’t get too close to the edge.

Where to Stay in Meteora

This hotel is located right beside massive rocks that tower over the hotel. It has full amenities, pool, and spa.

And these are all the things to do in Meteora. It is a beautiful destination in Greece that requires at least a few days to visit. So when planning that dream trip, be sure to add Meteora onto your travel itinerary.

About The Planet D

Dave Bouskill and Debra Corbeil are the owners and founders of The Planet D. After traveling to 115 countries, on all 7 continents over the past 13 years they have become one of the foremost experts in travel. Being recognized as top travel bloggers and influencers by the likes of Forbes Magazine, the Society of American Travel Writers and USA Today has allowed them to become leaders in their field.